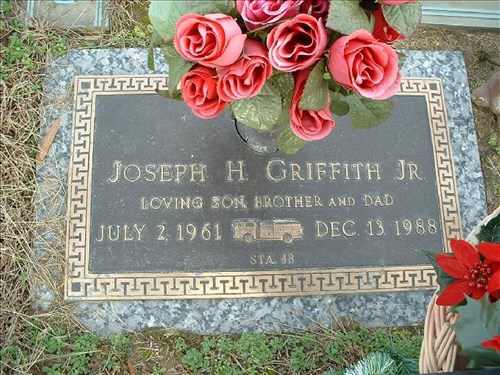 
Joseph H. Griffith of Felton-Viola Road, died Tuesday, Dec. 13, 1988, in Kent General Hospital, Dover, as a result of injuries sustained in an auto accident. He was 27. Mr. Griffith was a truck driver for ConAgra in Milford. He was also a member of the Felton Fire Company. He is survived by his wife, Bonnie L. Griffith; his three-week-old daughter, Nicole Ryan Griffith; a brother, Bobby Griffith of Felton; four sisters, Jackie Brown of Harrington, Melody Daniel and Debbie and Theresa Griffith, all of Felton; and his paternal grandmother, Ethel Griffith of Houston. Burial was in Mount Olive Cemetery, Sandtown. The following was from DSN news article, Dec. 19, 1988 “Griffith, affectionately known as “Pie Face” to his fellow fire company members was highly thought of, as evidenced by a turnout at the funeral so large that some mourners had to view the eulogy from the vestibule. The eulogy was delivered by the Rev. Milton Kemp, who praised Griffith as being compassionate, a hard worker and a good family man – someone who was ‘there for others to lean on’. Prior to the eulogy, Griffith’s casket was attended by a two man honor guard comprised of Felton Fire Company members garbed in dress uniform. Afterward, company members served as pall bearers, placing the casket on a ladder truck for the funeral procession. Joining the procession were firefighters and vehicles from Hartly, Harrington, Camden-Wyoming and Frederica fire companies. As the cortege made its way down Main Street, the fire hall whistle sounded in Griffith’s honor – praising the life and deeds of a good man fallen far too young.” As taken from DSN obituary, 12/1988. Prepared and edited on August 12, 2014 by Sandy Wood